1923 : The Pagava family move to France and live in Montrouge

1940 : Qualifies with a nursing diploma and treats the war wounded

1966 : Represents France at the 33rd Biennale in Venice

1968 : First retrospective exhibition of her work at the château de Ratilly

1972 : First exhibition at the Galerie Darial

1979 : Death of the painter Vano Enoukidze, her life companion

1982-83: First travelling retrospective of her work in Dijon, Beauvais, Troyes, Reims and Montrouge

Vera Pagava is a Georgian painter, engraver and designer, attached to the Second School of Paris. Figurative in her beginnings, her painting evolved in the early 1960s and took a more personal and demanding path, which led her to abstraction "experienced as a necessity",  she said, and "as the absolute search for the pictorial transposition of the light ".

"Painting reflects us, it is a miraculous mirror in which the outside world sees our inner world; talent is the means of communication between us and life, men, heaven and earth." Vera Pagava, from letter to Roger Hilton, Montrouge, April 15, 1936

Vera Pagava was born in 1907 in Tiflis, now Tbilisi, Georgia, into a family of enlightened liberal nobility. Her father, George Pagava, was a lawyer and her mother, Alexandra Naneichvili, was a professor of literature. Her uncle, Guiorgui Naneichvili, was close to the artists and intellectual circles of the capital such as the painters David Kakabadze, Elena Akhvlediani and Lado Goudiachvili. In the 1910s, Georgia, then within the Russian Empire, was a bubbling cultural and political melting pot where avant-garde artists, poets and intellectuals mingled, including Mayakovski and the brothers Kirill and Ilia "Iliazd" Zdanevich. As a child, Vera Pagava was deeply imbued with the artistic and intellectual effervescence of this pre-revolutionary world.

In 1919, the Pagava family left Georgia due to the state of health of the father. From 1920 to 1923, they lived in Berlin and Dresden, and they were very quickly integrated into the German artistic and intellectual community. Meanwhile, Georgia was overrun by the Red Army troops. The social-democratic government, in place since Georgia's independence had been proclaimed in 1918, was forced into exile in 1921. It was then a whole society, political and intellectual, which emigrated to Paris with the hope of a speedy return home. In 1923, the Pagava family joined the Georgian community in exile in France and settled in Montrouge.

Upon her arrival in France at the age of 16, Vera undertook an artistic training, first at the Preparatory School of Decorative Arts, then at the Arts and Publicity School where she was initiated into the techniques of engraving on wood and linocut, and at André Lhôte's Studio in 1929 where she studied sketching.

In 1930, the Pagavas moved to 2, Cité Rondelet in Montrouge, a pavilion in which she lived all her life. The same year, a young Georgian in exile, Vano Enoukidzé, found accommodation with the Pagavas. This meeting would be the start of a faithful companionship and lifelong partnership.

From 1932 to 1939, she joined the Ranson Academy, in the studio of Roger Bissière, on the advice of her friend, the painter Nicolas Wacker and Massier at the Academy. There she studied painting, both live model and fresco. There she met those who would become her most faithful friends; among them were Jean Bertholle, Maria Helena Vieira Da Silva, Arpad Szenes, Etienne Martin, Jean Le Moal, François Stahly, Elvire Jan, Charlotte Henschel,  Guidette Carbonell and Roger Hilton. Interestingly, in the Vera Pagava archive is a whole set of correspondence between her and Roger Hilton. Importantly, the young art critic Jacques Lassaigne, in search of young talent, also attended the Academy.

In 1936 and 1937, she produced two murals for schools in the 20th arrondissement of Paris. In 1938 and 1939, she participated in the exhibitions of the Témoignage group initiated by Marcel Michaud. She exhibited painted fabrics. During all these years, Vera worked for a living by knitting and printing upholstery for a clothier in Lyon. 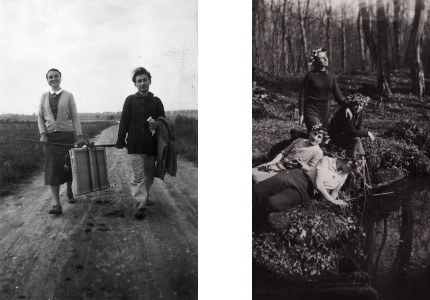 After the declaration of war, Vera Pagava wanted to help, so she enrolled in the Red Cross Nursing School and graduated. The years of war and Occupation were particularly difficult for Vera and her family. While the majority of her artist friends left the capital, she remained in Paris.

In 1943, she met Jeanne Bucher, a visionary gallery owner, who was to be a determining figure in her career. She offered to exhibit her paintings alongside Dora Maar the following year. This first exhibition marked the beginning of the collaboration between the gallery and the artist. Pagava was presented there regularly until 1960.

During these years, she made friends with a large number of artists: Alberto Magnelli, Hans Reischel, Karl Longuet and Simone Boisecq as well as Hans Arp and Sophie Taeuber-Arp.

She participated in the Salon des Surindépendants in Paris in 1948 and 1949 as well as the Contemporary French Art Salon at the National Museum in Stockholm, Sweden.

This decade was the decade of artistic recognition. She made important encounters like with Pierre and Kathleen Granville—collectors and great patrons—as well as Joseph Pichard who opened the doors of the Salon d'Art Sacré to her in 1950 and in which she participated until 1984. She also regularly participated in the Salons de Mai ( 1943, 1950-1955, 1967) and Réalités Nouvelles (from 1959 to 1985). Vera Pagava was exhibited regularly in France, notably at the Jeanne Bucher Gallery and abroad, in Sweden, Denmark, Germany, Italy, the United States (Yale University Gallery; Meltzer Gallery in New York, Pittsburg and elsewhere), in Switzerland and Norway (a traveling exhibition with Vieira Da Silva and Janice Biala at museums in Oslo, Bergen and Trondheim).

In 1951, the French State made the first acquisition of one of her works, Nocturne, a still life. In 1955, she painted her first fully abstract canvas Le Carré Ivre, but did not continue her research into abstraction until a decade later.

In 1958, Vera Pagava received an order from the French committee for the pavilion of the Holy See at the Universal Exhibition in Brussels. She made a monumental painting on wood, Christ Receiving Souls in Heaven, intended for the pediment of the Pavilion church.

In the early 1960s, Vera Pagava found herself without a gallery to represent her. She worked alone, supported by her painter and sculptor friends, and by Jacques Lassaigne, Pierre and Kathleen Granville and Joseph Pichard. It was during this time that her painting freed itself and moved towards abstraction, in which she found true freedom.

Between 1962-63 and 1967, she produced a series of non-figurative evanescent watercolours. In 1966, she represented France at the 33rd Venice Biennale. A room in the French pavilion was devoted to her watercolours.

From 1965 (and until 1988), Pagava regularly participated in the Salon de Montrouge.

In 1968, the first retrospective exhibition of his work was organized at the Château de Ratilly in Yonne.

In 1970, she met the poet and publisher Pierre Lecuire and his wife the poet Mila Gagarin,  whom she befriended. They collaborate together in the publication of many books (Le Livre des Livres, 1974; Pasargades, 1977; Metaphysical Poems, 1979; Soul One, 1981) for which Pagava produced woodcuts and dry point.

In 1971, Vera Pagava was offered by Thamar Tsouladzé-Taly, a compatriot and friend since the beginning of their exile, to participate in the adventure of her new contemporary painting gallery. The gallery was called Darial, named after the only crossable pass in the Caucasus Mountains, between Russia and Georgia. In 1972, an exhibition of recent paintings by Pagava opened the gallery. Besides, the gallery presented international contemporary artists and became one of the meeting places of La Spirale, an association of women artists founded by Charlotte Calmis. In 1978, Vera Pagava, Aline Gagnaire and Charlotte Calmis were the subject of a series of documentary portraits “Point of emergence”, dedicated to women artists, produced by feminist videographer Carole Roussopoulos and art historian Marie-Jo Bonnet.

In 1979, the painter Vano, her lifelong companion, passed away after a long illness.

In 1980, Serge Lemoine, then director of the DRAC of Burgundy, commissioned six artists to produce a work for the Telecom building in Dijon. Alongside Pierre Soulages, Shirley Jaffe, François Morellet, Anne Beothy and Hubert Munier, Vera Pagava painted an abstract triptych. Physically weakened, she was helped by artist friends and worked in the studio of sculptor Alicia Penalba.

In 1982 and 1983, the museums of Dijon, Beauvais, Reims, Troyes, Montrouge devoted a traveling retrospective exhibition to her: Un Parcours from 1932 to 1982.

In 1986, at the request of Abbot Louis Ladey, Vera Pagava created the stained glass windows and liturgical furniture for the Saint-Joseph Church in Dijon. This order will be the last of her life.